If you ask any of our Elevation Pro Staff members they’ll tell you the world of competitive 3D archery is a fun and fast-growing sport.

Aside from the challenges presented by varying target distances and the high level of competition at tournament events, the scoring within 3D archery rewards consistency while providing opportunities for strategizing and balancing risk and reward.

Taking a comprehensive approach to 3D archery requires that the shooter hone their equipment, their mental game, their shooting form, and with it, their proficiency with their bow.

It also requires that an archer have a solid grasp on the scoring procedures at 3D tournaments so that they have a game plan going into each new target and can calculate the appropriate times to take additional risk.

In this article, we’ll break down the scoring system within ASA 3D archery competitions. It’s also important to note that IBO shoots are scored similarly, but there are some nuances that vary between the two.

At ASA events each arrow can earn you one of 6 different point tallies. Starting at the top, the highest score for one arrow at an ASA tournament is a 14. The 14 ring is located at the upper corner of the animal’s vital area. Keep in mind that the 14 is only used in Pro shootdowns, when the top five finishers in each category compete in a shoot-off. 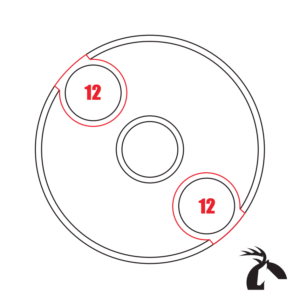 On the regular course, the 14 is out of play. The next highest score is the 12 ring. On a regulation ASA target, there are two twelve rings, located above and below the 11 ring (which is only used in IBO scoring). The lower 12 is in play, unless the shooter calls the upper 12, in which case an arrow that misses its mark and hits the lower twelve is scored as 10 points. The ten ring encompasses the 11 and 12 rings and is placed at the location of the target animal’s heart. 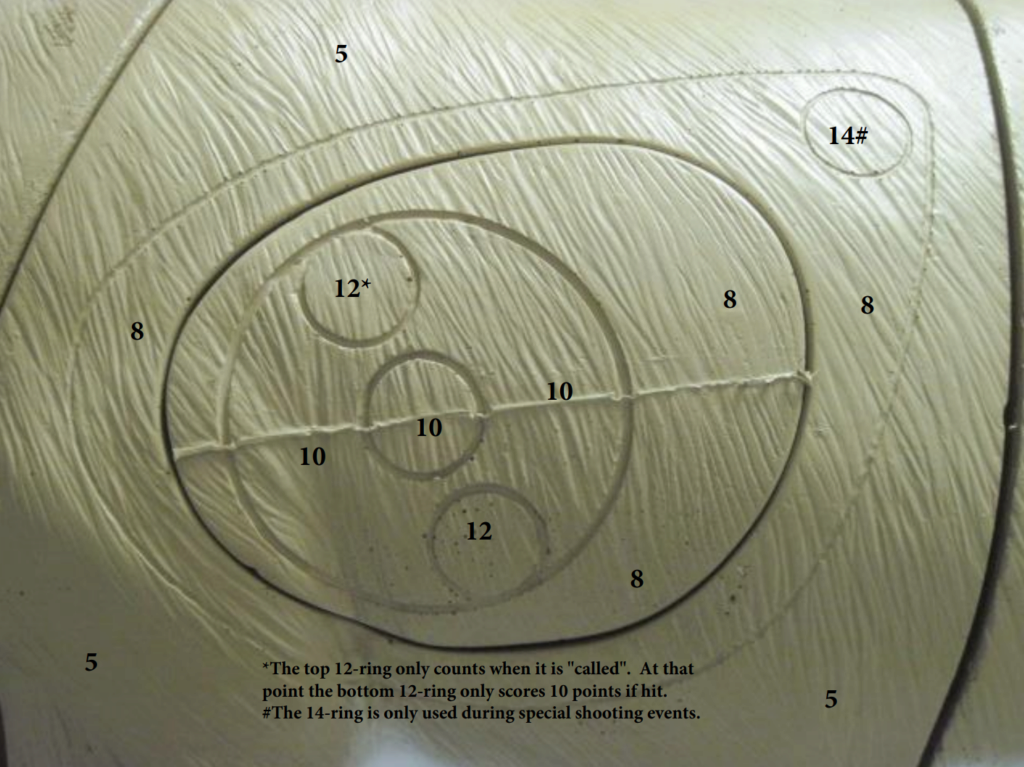 The placement of the scoring rings on a regulation 3D target translate well to a hunting situation since they are representative of the vital areas on the animal.

Additionally, targets are placed in challenging positions that provide valuable experience when tough shots are required during a hunt.

The larger vital area of the animal that surrounds the 10 ring is scored as 8 points, and an arrow that lands outside of any of these scoring rings and hits the body portion of the target is a five.

Missing the target, as you might expect, yields zero points.

At a two day ASA tournament there will be two target courses, each consisting of 20 targets. Shooting even at the end of the day would mean that you ended with a score of 200 (essentially averaging 10’s on each target).

When shooters talk about “shooting up” or “shooting down”, that is an indication of how their score deviated from shooting even.

Shooting even is a great score, and as they say, ten’s are always your friend.

However, depending on the level of competition that is present at the tournament, a shooter may need to shoot above even to make the shootdown.

The strategy of 3D archery comes into play when a shooter has to decide whether they have a comfortable enough lead to “play it safe” or if, conversely, a poor performance on day one has left them in need of making up ground on the leaderboard.

Likewise, in a shootdown, the 14 ring coming into play also throws a wrench in the works. The location of the 14 is such that this ring becomes very high-risk, high-reward.

Missing a 12 ring can often land you safely in the 10, while missing a 14 will leave you with a hit in the 8 point vital area, or worse yet, 5 points for a body hit.

If you “go for broke” right out of the gate and aim for the 14 and miss, it opens the door wide open for the next shooter to aim for an easier shot on the 12 ring and hope for a 10 at worst.

That point deficit could prove to be insurmountable for the remainder of the shootdown.

Likewise, if it comes down to the last target with a tied score and the animal is placed relatively close and the target is of a color where the rings are highly visible, the first shooter becomes more compelled to aim for a 14, because shooting the 12 ring leaves the door open for the next shooter to go for the win with the 14 ring.

As you can see, there is plenty of strategy and a risk vs. reward consideration to be made with each shot at a competitive 3D archery shoot.

Familiarize yourself with the ASA scoring system and make sure that each piece of your equipment is operating flawlessly with repeatability.

Consistency of the shot process and mental fortitude are fundamentals embraced by successful target archers.

For more target archery and bowhunting content, be sure to stop back and check out our future blog posts at Elevation’s Blog.

This site uses Akismet to reduce spam. Learn how your comment data is processed.